Research conducted by the Human Sciences Research Council, Statistics SA, the Medical Research Council and the Department of Health indicates that tobacco consumption is decreasing although these gains must be safeguarded.  Tobacco use impacts negatively on personal health as well as national economic development.

South Africa’s strides in lowering tobacco use must be safeguarded

Pretoria, Monday 29 May 2017 – Ahead of World No Tobacco Day on 31 May 2017, South Africa can confidently claim that that strides are being made in lowering national tobacco use.

This is based on the third South Africa Demographic and Health Survey (SADHS) conducted in 2016 which provides the most recent data on smoking and tobacco-related deaths, disease and disability amongst the adult population aged 15 years and older.  The study was conducted by Statistics South Africa (Stats SA) in partnership with the National Department of Health and the South African Medical Research Council.

Similar reductions in smoking rates have been seen in school learners in South Africa with the Global Youth Tobacco Surveys (GYTS) showing a decline in smoking rates from 23.0% in 1999 to 16.9% in 2011 – a 26.5% reduction. This is particularly important in tobacco control because a lifelong addiction to the nicotine in cigarettes usually becomes established in teenage years.

At the same time, the results of the South African National Health and Nutrition Examination Survey (SANHANES) conducted in 2012 by the Human Sciences Research Council and based on a sample of 15 401 adults in 10 000 households showed that 17.6% of adults surveyed currently smoke tobacco. Just of over 29% of males (29.2%) had a prevalence four times that for females which stands at 7.3%.

Speaking about the significance of these analyses of tobacco use in the country, Professor Priscilla Reddy, Acting Head of the Human Sciences Research Council’s Population Health, Health Systems and Innovation said, “A large proportion of adult South Africans continue to use tobacco. While considerable gains have been made in reducing tobacco use over the past 20 years, tobacco use and its determinants need to be monitored to ensure that tobacco control strategies remain effective.”

We must remember that “Tobacco use poses a significant threat to the sustainable development of all countries as well as the health and socioeconomic well-being of populations. According to the World Health Organisation, tobacco use globally remains the second leading cause of premature deaths, disease and disability after hypertension, causing over 6 million deaths each year.”

Most significantly says Professor Reddy, “according to the World Health Organisation, the deaths, disease and disability caused by tobacco use may also result in major losses to the economy. Tobacco use worsens health inequalities and exacerbates the cycle of poverty, as the people with low socioeconomic status spend less on essentials such as nutritious food, education and basic health care.”

“Research also shows that the life of a smoker is cut short by 10 years on average, resulting in the premature loss of economically active citizens. In 2012, the total economic cost of smoking (health expenditures and productivity losses) equalled 1.8% of the world’s gross domestic product, with almost 40% incurred by low-income countries. The adverse effects of these exposures threaten to undermine recent improvements in maternal and child health, and will result in increased rates of chronic diseases, disability and premature death in both newborns and women,” concluded Professor Reddy.

Notes to the editor

Demographic profiles of tobacco use

Full document can be accessed http://www.gov.za/documents/south-african-demographic-and-health-survey-sadhs

About the Human Sciences Research Council (HSRC)
The HSRC was established in 1968 as South Africa’s statutory research agency and has grown to become the largest dedicated research institute in the social sciences and humanities on the African continent, doing cutting-edge public research in areas that are crucial to development.

Our mandate is to inform the effective formulation and monitoring of government policy; to evaluate policy implementation; to stimulate public debate through the effective dissemination of research-based data and fact-based research results; to foster research collaboration; and to help build research capacity and infrastructure for the human sciences.

Join the conversation at:

For more information or to set up interviews, please contact: 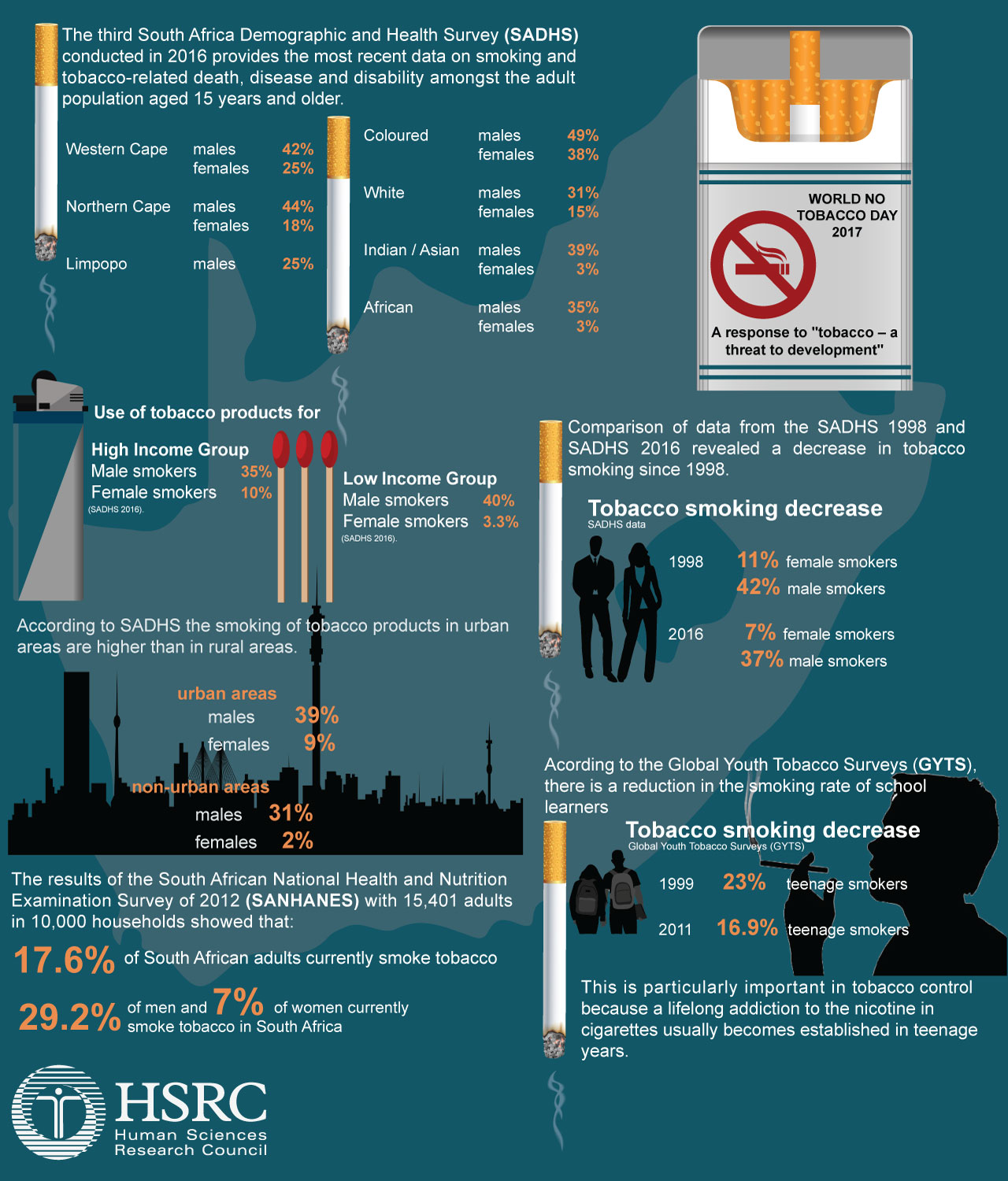