Drinking with ghosts: The aftermath of apartheid’s dirty war

By Michael Schmidt and published by BestRed

“A critical, independent and investigative press is the lifeblood of any democracy” – Nelson Mandela, 1994.

The South African press has been pushed into a precarious position by factors such as the Secrecy Bill, which pose a direct to threat to media freedom. Not since the apartheid era have journalists been faced with such a blatant attack on their right to disseminate information – particularly information relating to the state.

In this current climate, Michael Schmidt’s Drinking with Ghosts: The Aftermath of Apartheid’s Dirty War (BestRed) is a remarkable example of rigorously-researched and brave investigative journalism. The Executive Director of the Institute for the Advancement of Journalism in South Africa, Schmidt has a respected track record as a journalist for publications including the Sunday Times and ThisDay. The book draws on his extensive experience in the field. Drinking with Ghosts unpacks and reflects on the actions, both covert and overt, carried out by the state and its operatives during the apartheid years in Southern Africa. Its specific focus is on the Dirty War as exemplified by hidden nuclear weapons, clandestine forays into neighbouring states, mass poisoning and disposal of military opponents, shady arms deals and bloody massacres.

As Schmidt says: “We need to revisit the Dirty War in Southern Africa, not only because we need to relocate it in its proper historical context, but because its defining ethic of a descent into terror by both sides left such a deep and damaging imprint on the regional psyche, despite our attempts to cloak it in a ‘Pact of Forgetting’, that to a very real extent terrorism built our democracy – which is why we tend to revert to such debased behaviour in times of crisis, as in the Marikana Massacre of 34 miners by police in 2012.”

The book is divided into five parts.

Unhale Radiance: The African Atomic Bomb looks at South Africa’s relationship to nuclear arms, from its denial of their existence during the 1980s through to the curious connection between nuclear weapons dealers and South Africa in current times.

A Funny Smell: Biochem War and the Death Squads revisits the role the apartheid state played in the elimination of political enemies, particularly through individuals such as “Dr Death” – Wouter Basson – and Dirk Coetzee, the notorious Vlakplaas death squad commander.

The Long Shadow: Exporting War … and Peace explores the role South Africa played in the Bush War in Angola from 1966 to 1989, as well as the country’s subsequent role as “regional arbiter for evil … or perhaps even for good” as Schmidt puts it.

AN IMPRINT OF HSRC PRESS

Forensic Meditations: Massacre and Memory takes a hard and often painful look at massacres in South Africa and further afield, such as Rwanda, as well as political assignations, xenophobic murders and “dirty tricks” killings.

Epitaph: Breaking our Pact of Forgetting looks at “paper holocausts” and how to access the archives of apartheid memory, ending with a comparison of liberation movements and state responses in countries such as Argentina and Uruguay.

The book is bookended by a Forward and a last reflective Coda structured around the death of PW Botha.

Part of what makes the book so immensely readable is its stylistic sense of immediacy, so that even sections that date back ten, or twenty, or thirty years ago read as though they are happening right now. This, plus Schmidt’s absolutely impeccable eye for detail, from descriptions of dangerous characters to complicated military stats, make Drinking with Ghosts: The Aftermath of Apartheid’s Dirty War (BestRed) an irresistible read.
Extremely relevant to journalists in the investigative field (as an outstanding guide, as well as a great read), and also easily accessible and engrossing to those with an interest in South Africa’s socio-political history and present, Schmidt has produced an important book that not only uncovers a lot of dirty linen, but places it within a fascinating context.

Drinking with Ghosts: The aftermath of apartheid’s Dirty War is by Michael Schmidt (Institute for the Advancement of Journalism) and published in South Africa by BestRed.

About the author:
Michael Schmidt is an experienced field reporter, with a reputation for producing unique and challenging copy, having worked for 19 years on some of South Africa’s leading print titles including ThisDay and the Sunday Times before going into journalism training in 2008. He has worked across Africa, Central and South America and elsewhere. He has an interest in extra-parliamentary politics, and conflict reporting in transitional societies. He is a non-fiction author, published in Germany (2008), the USA (2009, 2013), Brazil (2009), and Quebec (2012). He is currently working on several more books, including a multimedia project on massacre and memory, with Lebanese writer Rasha Salti. He founded the Professional Journalists’ Association of South Africa (ProJourn), and The Ulu Club for Southern African Conflict Journalists. Currently the boss at the Institute for the Advancement of Journalism (IAJ), he continues to write for both the mainstream and alternative media. 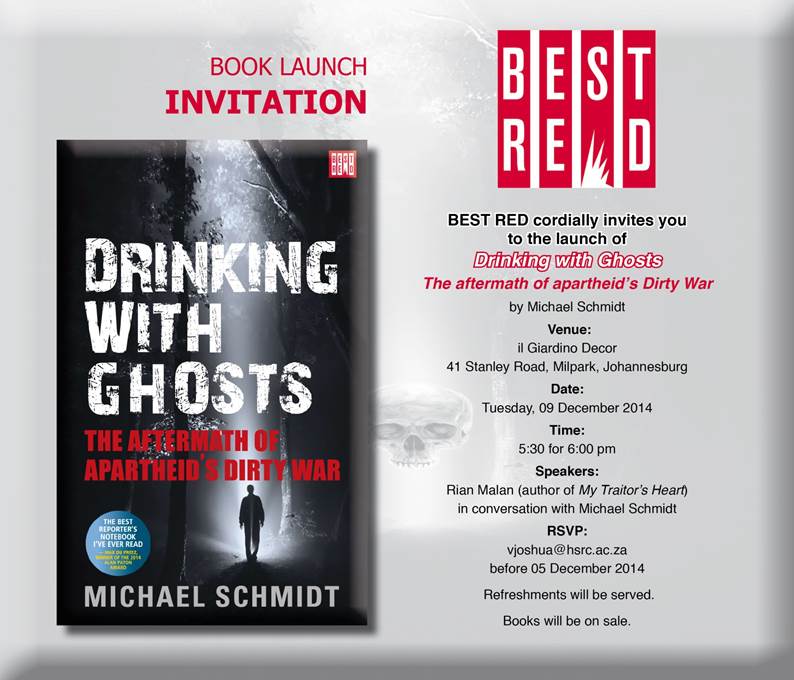